Japan has been at the very top of my travel list for as long as I can remember. I have always been fascinated by the culture and landscape. After filming Power Rangers Samurai for Nickelodeon, that thirst to learn more grew and grew. In April this year Katie and I decided we were no longer going to just talk about it, we were going to make it happen. We booked a Contiki and the rest is history. 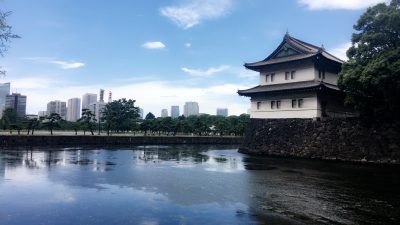 Day one We landed at 5 am and got a taxi to our hotel where were excited to eat some breakfast after two long flights  – the Japanese eat what we would consider more of lunch or dinner foods for breakfast, Curry and rice, fish, veges etc

The public transport (underground train) was pretty overwhelming with the lack of English and hundreds of people, but both Katie and I were both pleasantly surprised when we somehow arrived where we were supposed too . 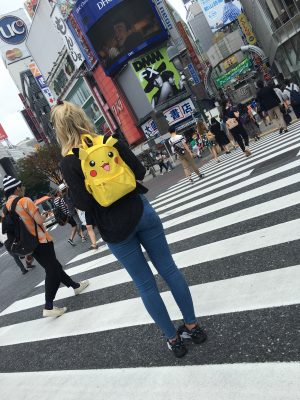 We met up with one of my Mothers friends at the busiest crosswalk, in Shibuya, Japan … because that seemed like the logical place to meet someone. She taught us some Japanese phrases and took us to see one of the shrines in the city. We lucked out as we got to see a bride in traditional attire taking her photos. Katie and I were sweaty enough in our minimal clothing so I can’t imagine how the bride felt.

Next it was time to head to a Cat Cafe – which has been a bucket list event for quite some time. The cats were so incredibly well groomed and were fascinated with my Pikachu backpack, as were many of the locals.

We looked around for a bit and happened upon a rooftop beer garden, we ordered food without knowing what we had ordered and sat in the sunshine laughing about how awesome it was we were in Japan and how proud we were of ourselves for ‘figuring it all out’ despite no sleep and no English – boom! 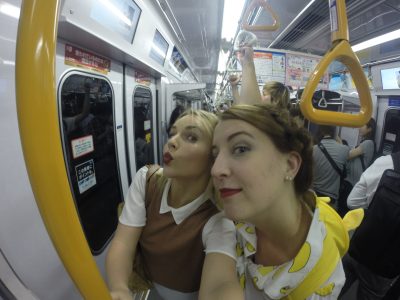 Day Two we met our Contiki group and all bonded pretty quickly. The majority of the people are from Australia, some form the UK and then a few from the US and South Africa. Katie and I quickly befriended two South African guys, Kashi and Akshay who we now consider our Conitki family and all look out for each other which is really nice.

I am not entirely sure how I am still able to walk after the amount of walking we did today. We mastered the metro system and headed to Harajuku. It was complete madness in the best way. Katie and I purchased far too many novelty t-shirts. Our favourites were ones that had incorrect English translations. For example instead of Strike a pose, it read Stripe a pose. Genius. 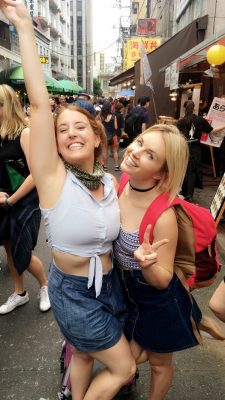 I think the biggest observation I made today was how polite and accommodating the Japanese people are and how clean the city is. There was barely any rubbish bins to be seen and I didn’t see one piece of litter all day. Impressive. Our tour leader and guide, Matthew gave us a great piece of advice, “if in doubt, bow”

Katie and I found a little underground Japanese Restaurant for dinner. We managed to order by looking at pictures in a menu. The food was beyond delicious. Soft shell crab, tofu, and a special pork dish that the chef gave to us complimentary. I have to say the food here is out of this world. The Japanese really pride themselves on having only the top quality products. In some stores like supermarkets, if the product doesn’t sell well in the first month it is on the shelves they wont stock it any more. So you know if you are buying something it has to be the best of the best.

The highlight of the day was by far our trip to the Robot Restaurant. If you are going to Tokyo you must attend this show. I don’t really know how to accurately describe it other than to just say it is extremely entertaining and insane in the best way! 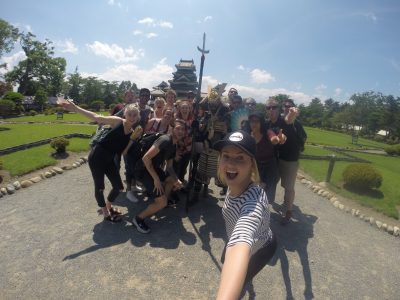 Day Three we headed back to Harajuku to pick up a few more items then headed to the ‘animate’ part of town. We had lunch at a maid restaurant. I thought it might be a little R –Rated but it really wasn’t. The maids served you and called us Princess. We played games with them and got our photo taken. It was odd but kind of amazing and fun and quirky.

The highlight of the day was our dinner. We had an 11-course degustation dinner at a Ninja Restaurant. It was phenomenal. In true Ninja style it was difficult to even find the restaurant in the first place, well played. Once we arrived we entered a room where a master Ninja joined us and then proceeded to guide us through tunnels, over little rivers and under low beams till we found ourselves at our table for two. A Ninja served us and another performed magic Ninja tricks between our courses. Both Katie and I just starred at each other laughing for the longest time about how freaking awesome this was. 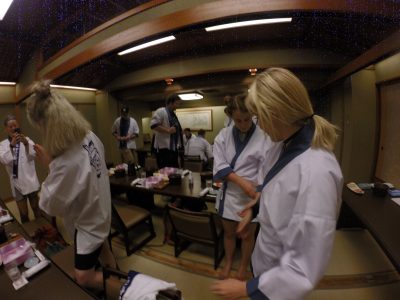 Day four we departed Toyo and headed to Hakone. On the way we stopped at the Tsukiji fish markets and did a sushi making class. Turns out I have a hidden talent for making sushi, which is great considering I can’t really make anything else… yet.

We made a stop on the way at the rope way to take a gondola to the summit to see Mt Fuji. Unfortunately due to the fog we could barley see 50ft in front of ourselves. We made the most of it and took some pretty great sight seeing shots with literality nothing in the background haha. 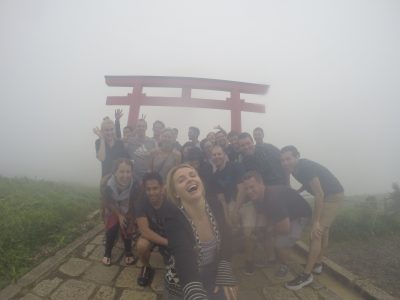 The Ryokan (Traditional Japanese guest house) where we stayed was so cool. We slept on Tatami mats and futons and wore robes for the duration of the evening. The robes are so comfortable, most of us were hoping we could wear them for the rest of the trip! 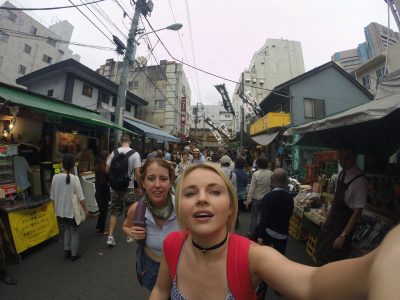 Day Five was a big travel day. We stopped at the Matsumoto Castle, one of the original Samurai castles. I was so impressed by the castle and how steep the stairs were. I can’t imagine having to maneuver my way around with full armor on. I was struggling enough in my active wear haha.

We popped in to Hida folk village and this was probably one of my main highlights of the trip so far. It was so peaceful. Running water, a pond, places to sit and rest and games to play with friends. It looked like something straight out of Pintrest. That was until we found the giant gong / bell … quickly the silence was disrupted by everyone in our group wanting to have turn ringing the giant bell. 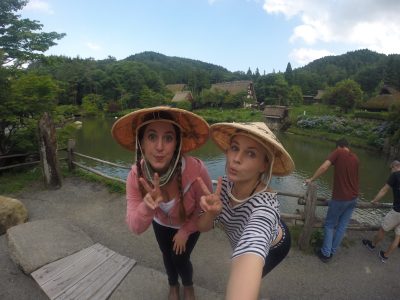 Here is the Contiki we are on if you wanted to check it out – https://www.contiki.com/destinations/asia/tours/2056-japan-unrivalled Motivate Me : What Is Your Purpose

Kimberley’s Blog – Is travel the key to unlocking your potential?